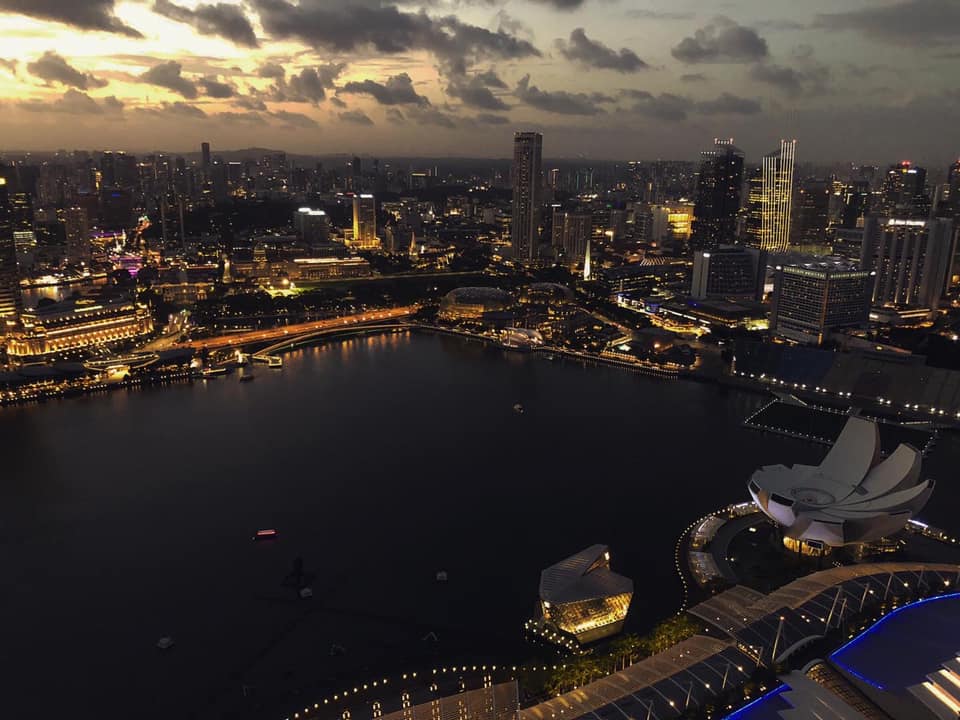 I was very lucky in that I went on holiday juuusstt as coronavirus was spreading worldwide. I went to Singapore and Malaysia in the last two weeks of February, when there were around 50 cases in Singapore and Malaysia, Italy wasn’t that crazy yet, and only Chinese tourists had been restricted for travel.

As my last trip was to a 6 week one to Europe where my phone broke, I got sick, my wisdom teeth played up and I went during a season change. I started panic packing and then being like wait… I literally are only going for two weeks. You don’t even need laundry powder. STOP!

I really liked Singapore. It was so clean, and everything was organised. There was no traffic, because it’s apparently really expensive to own a car and park in Singapore, and only really new and fancy cars are on the roads. I am extremely lucky that I grew up in Chinese and Western culture, and Singapore was like if a nice city in China was all in English and it was really hot. All the food was familiar, and really cheap. My favourite food in Singapore would have to be the Hainanese chicken rice (which is their national dish) and ice milk teas (teh) made with condensed milk!! Soooo good. With Hainanese chicken rice, it’s like super soft poached chicken with rice that’s been cooked with chicken stock and lemongrass, ginger, garlic and pandan leaves, but it’s just like really flavourful chicken tasting rice. Sooooo goood. I also really like noodles and seafood/crabs, so Singapore is a Chinese food palate heeeaaven.

For breakfast we would walk to a cafe that would be busy with locals all the time, and we would get crispy golden kaya toast (toast with coconut jam) , soft boiled eggs with thick sweet soy sauce that you dip it in, wonton noodles which are these thin egg noodles with some dark soy chicken sauce, a little bit of bbq meat and veg and a bowlful of wontons in some broth or nasi lemak, which is coconut rice with fried chicken, peanuts, deep fried anchovies and sambal, which is chill sauce.

I have had sambal in NZ before, and it wasn’t very nice. I never understood why Singaporeans and Malaysians froth over it in all the food videos I’ve watched (I’ve watched… a LOT of food shows). but yass, I understand it now. Sambal is this sweetish, savoury chill thick sauce that not only binds things together and just makes everything taste a bit more special.

We also went to the top of the Marina Bay Sands hotel, which is the backdrop of the wedding in Crazy Rich Asians. But the place where they hold the wedding is in the middle of the park?? Idk about the view, but it looked very ordinary to me… they must’ve hid all the tourist signs and things around that area for the movie too.

Smashed out Universal Studios in half a day, just because there were no other tourists around but some Aussies and other countries!

Also, the McDs deals in Singapore are insane. Soooo cheap. Also their McSpicy is quite spicy. It’s this real chicken filet deep fried with spicy breading. Oh my god I’m going to miss fried chicken so much in quarantine aaahh!!

I think we got to most of the tourist places except the merlion statue. I also don’t know how locals were wearing things like jeans and long sleeve tops and scarfs. Like how ?? I don’t know how people can function without aircon, I would sit for an hour or two in a hawker centre and get sweaty :/

After about 5 days in Singapore, we caught a very nice bus (the seats were massage chairs that could recline and be like lazy boys and there was wifi!) to

Not going to lie, I struggled in Malaysia. In Singapore and in all the countries I’ve been to, English was widely used because the places I visit are normally tourist towns. I found going through Thailand with English was fine. I thought Kuala Lumpur would be similar, or that it would be easy to get by with body language. But I found that a lot of the people, from people in malls to people selling food, could not understand or speak English.

It was hard ordering food from places that weren’t touristy, because it’s not like there is a menu and my brother and I found out we were pronouncing the food wrong (lolol we pronounced roti canai like roti can-i with a hard c), and when the people were trying to ask us questions about the dish, because people typically ask if you want condiments or what meat or sauce you’d like or something else, we couldn’t understand it or how much the food was. It was struggle street when a cafe (called mamak in Malaysia) was trying to tell us the noodles that we kept trying to order was only available for dinner and noone in the place could speak English. It was also clear that the dominant type of people were not Chinese, but there was more of a mix of ethnicities, with a lot of Indian, Bangladeshi, and of course, Malay. I really admire Malaysians being able to speak so many languages, since the main languages seemed to be Malay, Tamil and Hokkien.

Also, unlike Singapore, everyone was allowed to be on the road. So there was sooo much traffic, and construction to make new roads because there was so much traffic. A place that was only 10 minutes away took like 40 minutes of being stuck in traffic. In Singapore we could walk to a mall and a lot of eating places, but in the place we stayed at in Malaysia, although a lot nicer, there was nothing in walking distance, plus it’s more dangerous to be walking around.

I’m not saying that one country is better or worse, but I am saying that they are quite different despite Singapore once being part of Malaysia.

So we were really grateful for one of my brother’s friends who took us all around KL to all his favourite local spots and we ate some serrrriooussly gooood food.

This was arguably one of my favourite meals on the trip: nasi lemak ayam goreng, which means coconut rice with fried chicken *golden music plays

Yes. I had durian! I think the smell is so overhyped, but then I’ve grown up with smelling it in Asian fruit and vege shops. To me it just smells fragrantly ripe. It tastes sort of like really thick sweet custard. Like there is not watery parts to it, its just extremely creamy. Not my favourite fruit, but I feel the same way toward as it as I feel toward like, apricots.

A lot of food… and guess what?? We had this all in ONE DAY. This is not even all the food as well. I was already stufffeeedd when we hit the roti tisu, but our friend was determined to show us as many places as he could in one day. Forever grateful to him!

We also met up with him on our last night in KL where we had a seafood dinner and caught a local night market (called a pasar malam) where we ate rambutans for the first time and bought a few mangos home to eat. Reeeaallly wished we had done that earlier in Singapore so we could’ve eaten more mangos.

I’m not sure if this gallery thing looks better or not but at least it’s toward the end and I saved some space.

Then, I went back to Singapore and to the Changi Airport, where we got the reports that NZ had it’s first coronavirus case just as we hopped off the Grab (SG and Malaysia version of Uber and so so so so cheap) and went into the terminal. So we were very lucky that we got back just before things started heating up. I got back and went into two weeks of self isolation, was allowed to return to work last week and now back in extreme, extreme quarantine along with the rest of the country.

You can probably tell what my purpose was for going to Singapore and Malaysia. it wasn’t to shop, because I don’t like shopping internationally especially so many things are online and I’m not that materialistic. It wasn’t to go see that many sights and sounds, although I did go to all that we could.

I went there for the FOOD.

So I am glad I had a taste of freedom and amazing, amazing food as 3 weeks later the country is now officially in a state of emergency and everything but supermarkets, pharmacies and doctors and hospitals are shut down. The only thing I can eat is stuff I’ve made personally, which is not that great. Like my cooking is not bad – I actually think it’s pretty good – but it is no deep fried savoury crunchy chicken on some coconut rice and delicious sambal, washed down with an ice cold tea made with condensed milk. Ohhhhhhh sooooo gooood

Thanks for reading so far, because it must’ve been a mission to scroll down from all the pictures. I’m so glad we went at a right time, where the travel restrictions were in our favour rather than extremely against now. it’s so bizarre to think we are only on day 1 of a 4 week country lockdown – this is going to be some very bizarro times.