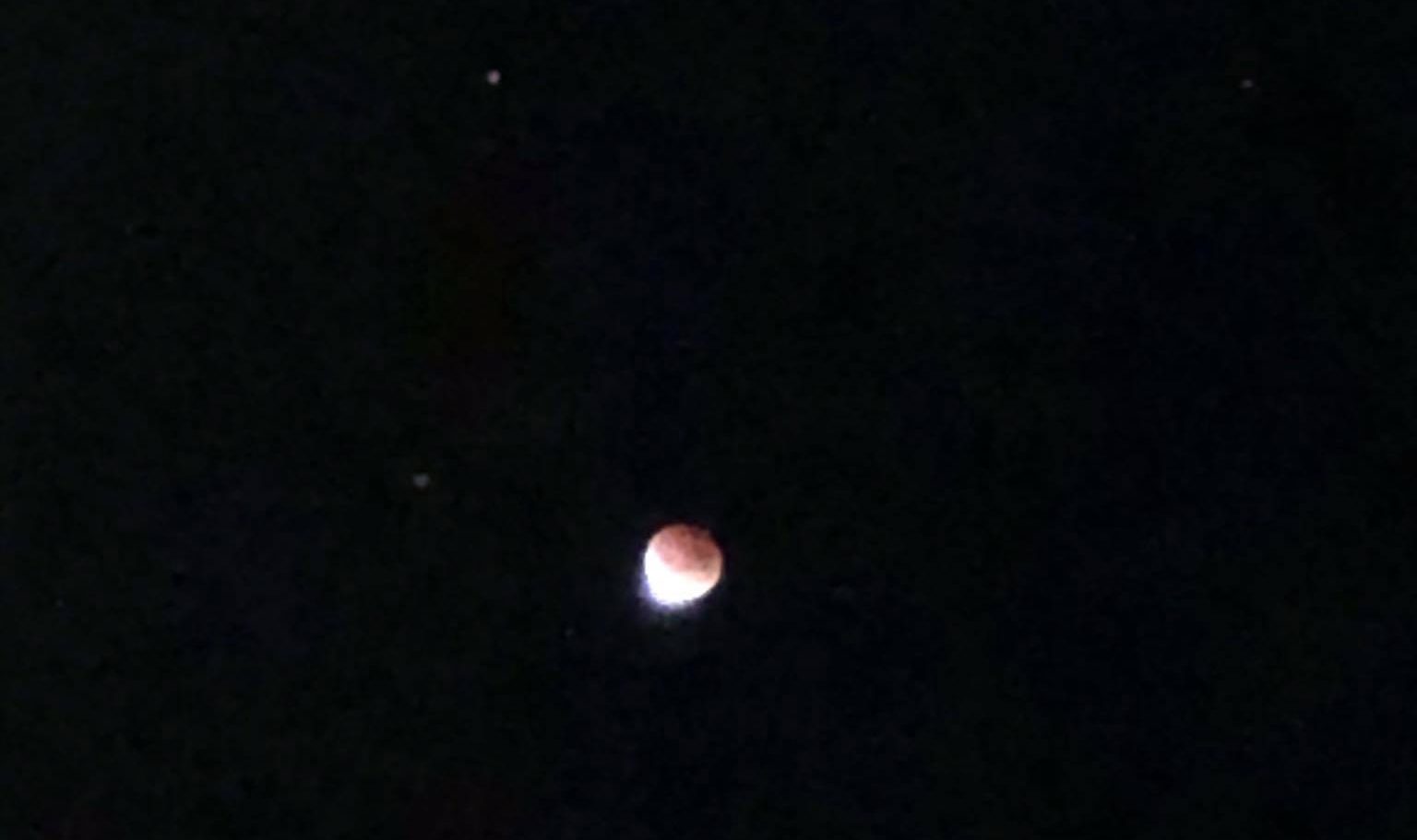 On Wednesday night, I set an alarm for 11pm and ran outside to see a tiny little moon go a little bit rusty, and I thought it was awesome!! It was some sort of eclipse. I had seen the moon earlier that night and it looked huge – I didn’t realise how small the moon can get?? Popular opinion seems to be that it was underwhelming, but I liked it. I always miss shooting stars and eclipses so this was the first time I’ve ever seen anything happen in the sky.  It turned 11:11pm and I was  living  for  it   like every basic astrology girl (although I’m not into astrology, just basic). If there was ever a time to make a wish,  11:11 during a blood moon would be an ideal one. I had some good news recently, and maybe I needed to give credit to this blood moon.

As I was staring up at the sky alone in my pyjamas with my feet getting cold in the dark but filled with a happy little wonder, I couldn’t help but think about a memory. I was in the ‘talking’ stage with a boyfriend when I was studying, and he was taking an astrology class. For one of his assignments he had to go stargazing at 3am with his class, and I remember he was debating whether to stay up, or go to sleep for only a few hours.

While I was sleeping he sent me all these lovesick messages, saying how he was up at 3am freezing his ass off and looking at the stars and all he could think about was me. It was like modern day love letters, complete with instant delivery, the ability to keep adding on and on, and timestamps so there was proof that he was up. I guess his ‘love language’ and mine were very compatible since I love words. Proof: this blog lol. I actually believe my love language is quality time but I don’t think I am as touched by all the time he spent with me – instead when I remember the texts and telling me how he was up gazing at stars in the moonlight with me on his mind I get mentally swept off my feet again. It’s like something out of a romance novel, and I 100% ate it all up. Maybe the second most romantic thing someone has said/done for me.

And now, years later, I am in his position instead, looking at the stars and wondering….

This is difficult for me to write about since I don’t talk about this stuff with anyone including my friends since I think it sounds so cringe when I say it out loud. Also I feel like this is very unattractive for a guy to read, I sound like the opposite of chill. I can’t choose my words like the way I’m doing now. I feel like I’m in a constant cycle of boy likes me but I don’t like them, I like boy who has girlfriend or I am too afraid to approach boy that has not noticed me. My standards are way too high, but the boys who would qualify I’m scared that I won’t meet theirs. I have no idea how to flirt with someone that I actually want their attention.

Why is finding someone where our stars align: I like him and he likes me (and in the same country) : so fucking difficult?

Everyone else seems to manage it and it’s as easy as breathing for them, but I never seem to find a click.

As I mentioned before, this week has actually been very good for me. A lot of what I was hoping for, looking for and wanting happened and I am very thankful to the universe. It’s super greedy for me to want more, but it’s part of the human condition to always want more. I don’t think it’s possible for a functioning human to be 100% happy with their current situation and not think about the future or the past.

So if I could wish one teeny little wish on 11:11pm on a blood moon, it would be to ask it to put someone under its spell for me again. It would be great to have someone look at the stars and want to tell me all about it. Wouldn’t it be a dream to have someone who’s wish on a shooting star involved you.

Maybe the next one can feel like he’d go to the moon and back for me.